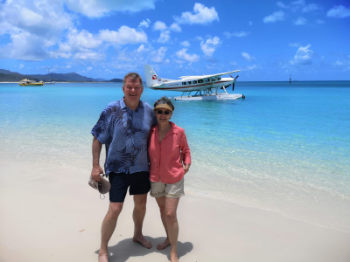 Hello from us, driving a camper van from Cairns, northern Queensland to Sydney. I finished a seminar in China, hooked up with Susie in Hong Kong and we flew into Cairns, picked up the camper and headed south. I lived in Australia from 1964 until 1970 so know some of it well, or thought I did. Australia is hot and records are broken daily around the continent; we have bought a fan and a gazebo and, so far, the van air con has done its job.

Susie asked me why I so love Australia. I had to think about it a bit but basically my answer was that there is a dimension of consciousness here that, while it is true in many places on earth, is most accessible in Australia. It is the sense of connection to a dimension I would call ancient. In the British Isles and Ireland that dimension is also there but the middle earth energy is so strong it often covers this deeper profound ancient realm. Here it shows up everywhere, in the flora and fauna, in the mountains, the rivers, the many unique rock structures. The Australian First Nations have a deep connection and understanding to this dimension; they learned to travel far and wide within this energy connection to an immense understanding and appreciation of the natural world.

The people who have inhabited this land more recently have less value for this world and Australia now appears and behaves very much like North America. If I blink, then glance quickly at the malls and spacious streets, I feel like I am in the States. Also, the Australians appear to have fully embraced political correctness and are so nice, often wishing us a wonderful, stupendous and ecstatic day! We have been shocked to see destitute First Nations people in Australian cites, barefoot, ragged, living without dignity or hope. These people and their knowledge continue to be shunned, as we all shun our knowledge of the ancient energies. We are totally out of balance and while many warn us of our folly still few are listening and even fewer acting.

It is time for us to learn reverence and devotion to this world, to expand our awareness of the many avenues to this natural reality that is part of us, for through these channels we get to know our true nature, the nature of spirit. We must give up our shallowness, our pettiness, our complaining to go so much further and so much faster. Devotion means making something else more important than ourselves; only this attitude to the natural world can save us all from the consequences of our over population, the mechanisms we have for destruction, wreaking appalling damage on whole ecosystems.

For so many of us the natural world has appeared at odds with the urban world, but the fact is there is one world and only one world; this is not a bad thing for it means we can save it once we gain the willingness, get past our fear of loss and our belief that someone must lose something. We could start today to learn reverence and devotion and dedicate ourselves to life, in every one of the miraculous manifestations of that force for it is a sacred force, a gift we have all been given. Let’s not squander it in any form.

Meanwhile Susie and I, with all the openness and awareness we can muster, will continue our journey to Sydney and beyond.