We are just back from our annual training in Hawaii and feeling good. During these 10 days we lift the lid on those deeper patterns, self-concepts and beliefs we have hidden away in our minds. And we find the amazing gifts we human beings have, our abilities to communicate and connect at profound levels. This has left us with that afterglow of love and peace that such an environment can establish. Then it is always important to remember Eckhart Tolle’s words of wisdom along the lines of:- if you think you are enlightened go and spend 10 days with your family and see what happens!

What became clear to us in Hawaii were the levels of aggression and even hatred we carry in our minds. We all recognize outward aggression – the shouting, abusing hostility of the often-righteous person. Most of us do not identify with this form of aggression especially if we have been on the path for some time. Mostly we project that out on our wider world in areas such the Middle East and do all we can to distance ourselves from such behaviour.

The second level of aggression is the act of withdrawal, not so outwardly aggressive as the first form but very very effective. Often people who have made an art form of this type of aggression can show mountains of evidence how it is much more an act of mercy, certainly superior and always justified. When we withdraw we may not see it as an act of aggression and yet with the most cursory observation it so obviously is. Often in relationships partners will balance out with these two forms; however what we most want to shine the light on is our passive aggression.

This third form of aggression could be the most widespread but equally is so hidden. Passive aggression can only remain in place if the person who does it remains blind to their level of aggression. This blindness is what it is built on which makes it difficult to deal with without you yourself becoming aggressive. Typically people who are passively aggressive also have a deep level of refusal: a refusal to succeed, a refusal to get to loving partnership, a refusal to become a team player or belong meaningfully to a community. Needless to say this refusal drives people around them to distraction; when they try to communicate the effects of this refusal to the passive aggressive they are mostly met with confusion or misunderstanding, and finally a refusal to change. 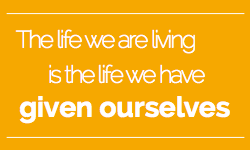 All of us can grow in our awareness as this is a slow unfolding, but it is an unfolding we need to be vigilant about as we grow ourselves to becoming increasingly harmless and mercifully tender and tolerant. The passive aggressive wears blinkers to their aggression and yet we need to persevere with our methods to reach out. Equally we must become honest about our own levels of aggression in whatever form it takes. Aggression is our investment in attack in the belief it will keep us safe but it will not. We need to purify ourselves of this desire to separate and instead turn more and more to the light.

Take time this week to notice any situations when you feel aggressive, and be aware of your own preferred style – is it open hostility, withdrawal, or passive aggression, or a mixture of all three?

With love,
Jeff and Sue

The UK team in Hawaii with Chuck and Lency Spezzano